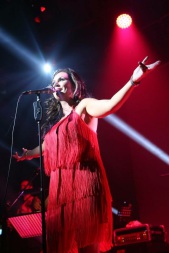 Anna is an incredibly versatile singer, who performs a vast array of musical styles including classical, jazz, country and popular music.  Anna is based in the North East of England but her cabaret performances also captivate audiences throughout the UK, Europe and on Cruise Ships.

Anna also can come with her band "The Anna Reay Band", which is the most versatile function band in the Region, providing an extensive repertoire that suits almost any occasion, including weddings and Corporate Events.  The Band performs to great acclaim, through the country and abroad.